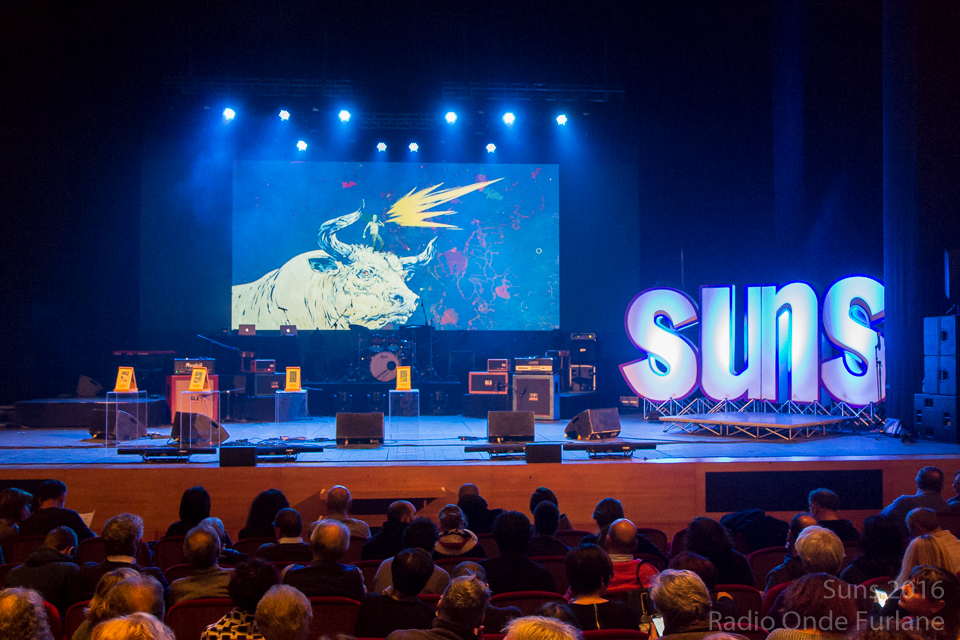 This year Suns Europe will be electro-pop, rock & roll, but also
rap, indie rock, and much more…

UDINE – This year Suns Europe will be electro-pop, rock & roll, but also rap, indie rock, electronic drums and much more… because Suns Europe is not only about music! Day after day, the cast of the 3-day festival (30 th November – 2 nd December) is progressively taking shape: along with the Friulian hosts, there will be bands, filmmakers, writers and performers from the Basque Country, Wales, Grisons, Brittany, Galicia, Lower Saxony, Occitania, Sápmi (best known as Lapland), Ireland, Sardinia and Buryatia (near Mongolia).
For the third year, Suns Europe will bring together ancient languages and modern forms of communication. A festival made of art, contamination, talent, linguistic pluralism and creativity. Once again, the festival will hit the stage at Teatro Nuovo Giovanni da Udine (but not only, this year), where music, cinema, theatre and literature expressed in minority languages of the Old Continent will be the true protagonists.

With the 2017 edition, Suns Europe confirms once again its role of leading European festival to promote and raise awareness of minority languages among people and received the patronage of the Council of Europe for the third consecutive year. Our goal? To promote unique and refined artistic productions, showing how linguistic diversity in Europe is a fundamental right, as well as an invaluable creative resource. Hundreds of artists will arrive in Udine to create a real and not-to- be-missed “Babel” of languages, sounds and contaminations and to involve all local citizens in this rich programme of events. A three-day festival that will culminate with the main event at Teatro Giovanni da Udine, Saturday 2 nd December at 09.00 pm.

You have time until 13 th November to join our staff of volunteers: simply download the
application form from the website www.sunseurope.com and fill it in.
Suns Europe is a project of Cooperativa Informazione Friulana (publisher of Radio Onde Furlane) and Cooperativa Puntozero, with the sponsorship of Arlef (Agjenzie Regjonâl pe Lenghe Furlane – Regional Agency for Friulian language), Regione Friuli Venezia Giulia and Fondazione Friuli, in collaboration with the Municipality of Udine, Fondazione Teatro Nuovo Giovanni da Udine, Babel Film Festival and under the auspices of the Council of Europe.

This site uses functional cookies and external scripts to improve your experience.

NOTE: These settings will only apply to the browser and device you are currently using.

Google Analytics is a web analytics service provided by Google Inc. ("Google"). Google uses Personal Information collected for the purpose of evaluating the use of this Website, compiling reports and sharing them with other services developed by Google.
Google may use the Personal Data to contextualise and personalize the advertisements of its advertising network.
This integration of Google Analytics makes your IP address anonymous. Anonymisation works by shortening the IP address of the Users within the borders of the member states of the European Union or in other countries participating in the agreement on the European Economic Area. Only in exceptional cases, the IP address will be sent to Google's servers and shortened within the United States.

We use cookies to ensure that we give you the best experience on our website. If you continue to use this site we will assume that you are happy with it.Ok
</htm